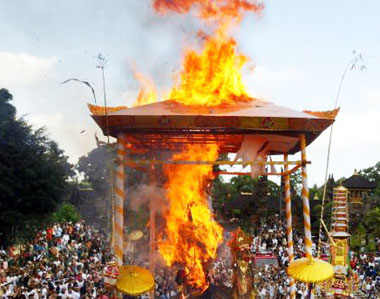 Ngaben generally defined as a cremation, although the etymological origin of the word is not quite right. Besides there is no tradition Ngaben through cremation.

Ngaben actually comes from the word “beya” means the provision, namely in the form type that is needed in the ceremony Upakara Ngaben it. Beya said that means lunch, later in the hull of Indonesia into the cost or “prabeya” in Balinese language. people who hold beya in Bali called “meyanin”. Ngaben or meyanin said, has become the standard language, to mention uppacara “wedhana Sawa.” So really no longer need to be debated origin of the word. What is clear is upaccara meyanin Ngaben or organizing Sawa (bodies) for those who have died.Ngaben or meyanin in terms of other standard, which was mentioned in the papyrus is “atiwa-Incident”. Atiwa said even this can not be sought in origin, possibly derived from the native language of the Archipelago (Austronesian), considering this kind of ceremony we also encountered the Dayak tribe in Kalimantan, which they call “tiwah”. Similarly, in the land of the Batak we hear the term “tibal”, to mention a ceremony after the death.

Ngaben or meyanin ceremony, or also atiwa-occurrence, for the Hindu Tengger Mountains known as “entas-entas”. Entas words remind us of the principal ceremonies Ngaben Bali. Namely tirta pangentas (holy water) which serves to terminate the love of the Atman with the body and deliver the Atma to the carnal nature Pitara (afterlife).

In other languages in Bali, which connotes fine, it is called Palebon Ngaben, which comes from the meaning prathiwi dust or soil. Palebon means making prathiwi (ash). To make the land there are two ways, namely by burning and planted into the ground. But how to burn is the fastest.

Human consists of two elements, namely: Physical and Spiritual. According to Hindu man is composed of three layers, namely Raga Sarira, Suksma Sarira, and Antahkarana Sarira. Sarira is a rough sport body, the body that is born of passion (ragha) between mothers and fathers. Sarira Suksma astral body or the body is composed of natural hallus thoughts, feelings, desires, and passions (Citta, Manah, Indriya, and Ahamkara). Antahkarana Sarira is the cause of life or Sanghyang Atma.

When the man was dead, Suksma Sarira with Atma aakan leave the body. Atma which had so long united with Sarira, the confines of Suksma Sarira, very difficult to leave the agency. Though the body was not able to function, because some parts have been damaged. This is a suffering for the Atma.

For not too long hindered Atma departure, agencies need to speed up the process of rough diupacarakan kembainya to its source in nature. Likewise for The Atma should be made to go to the ceremony and decided Pitra natural attachment to the body rough. This process is called Ngaben.

If Ngaben ceremony held within a period not long enough, the body would be roughly the germs, called Bhuta cuwil, and atmanya will get hell.

Having known what the background was ceremony Ngaben, it can be formulated aims and objectives ceremony. In outline, it is meant Ngaben:
To process the return or restore elements that make the body or ragha to the origin in nature, and
To deliver to the nature of Atma Pitra by deciding attachment with worldly entity (ragha sarira).

In the course of Atma, it is necessary supplies or “beya” which is a by-by for the fourth brother who was waiting in the form of a tense, namely: Dorakala, Mahakala, Jogor Manik, Suratma. With the stock or it is expected Atma beya can return safely.

Then the goal is to ragha Ngaben ceremony sasira can quickly return to their home in this nature and to the Atma can safely go to the nature Pitra.

Therefore, Ngaben really can not delay. So it should soon be diaben meningga.

Hindu religion in India has been implementing in this way since the old times. The Yudhistira mengabenkan the heroes who died in the fighting fields in Tegal Kurusetra, instantly just by saraa “wija Chess.” The princes of India like Mrs. Indira Gandhi, in a short time already diaben. None of menjelimet Upakara, only pperlu “Pancaka” a furnace, fragrant wood as the fire wood and looked mantram-mantram or continuous chant floated.

Hindu religion in Bali is also, in principle, follow these ways. It’s just still provide an alternative to waiting a while. Awarded to wait a while, probably intended for the gathering of relatives, waited for a good day by sasih (months) and others. but do not wait over a year, if passed could be chipped Sawa Bhuta it. So in fact we are in Bali are given the opportunity not only through the year.

While waiting a year to diaben, Sawa must dipendhem (buried) in the Setra (grave). To not cause an undesirable thing, Sawa who made dipendhempun ceremonies tirtha pangentas (holy water). And the process of return to nature ragha sarira will run maphendem role in this ceremony.

So basically Ngaben ceremonial purposes, namely:
Releasing the Atma from worldly ties.
To get the safety and enjoyment.
To obtain the heavenly morning Pitra.
Implementation Process Ngaben

In outline the implementation process Ngaben ceremony can be explained as follows:

Sawa doused with water, to the whole body. Then cleaning Sawa implemented. At first his mouth was cleaned with water kekumur, then given a “sigsig”. Then oiled. After the upper net, his face covered with prarai. Then body is cleaned with ordinary water. M ulai from neck to feet. Dirty fingernails scraped. After that diurap with bablonyoh followed by a yellow and white. Sawa has two unused blonyoh cleaned again with clean water and water kumkuman.

After cleaning and then continued with the means menampatkan:

intaran leaves on his brow, pusuh menuh on above his nose, glass placed over the eyes, waja placed on her teeth, sikapa-sliced thinly placed on his chest, put the duck on his stomach, malem placed on the ear, the leaf is placed on behalf of eggplant balls male sex, lotus leaf placed on a woman’s genitals. Then disembar with eggplant leaf. Feet on the ducks ngekapada, with diamustikan filled with coins kwangen 11. Monmon ruby inserted in his mouth.

In each body part is placed kwangen as follows: top-edged kwangen dadap placed on the head or forehead is facing downward. Kwangen which contains 11 coins placed in the middle of milk (breast), facing the head. Beriai Kwangen the coins are accompanied by nine lotus flowers placed on the midriff. Kwangen containing flower buds of white chrysolite right hand placed on the left, and two kwangen right foot placed on the left. Given tirtha cleaning and penglukatan. After that then rolled with a white cloth and mats kalasa. Then dilante and securely tied with rope. On top of scrolling leaves placed telujungan, white cloth to taste, and tatindih.
Offering
Sawa was appointed, pelted with eggs from head to foot, children, grandchildren and others then “masulub”.
Sawa put to sleep on the couch. Dihaturi arbor, and tataban one soroh eedan.
Introduction to solar Upasaksi holy one asoroh eedan soroh with offerings, along with electricity, fresh segau and flour.
Upasaksi dihaturkan, Sawa tataban to follow. Younger family worships. When finished feeding the family to the death with the arbor tool dapdap leaves and use your left hand. Implementation of the Setra Pengabenan

After dilelet dengan lante and covered with white cloth awning rurub, kereb sinom seven pieces and sprinkled with fragrant flowers and perfume and then carried to the Setra saawa. Which runs most of their faces that bring sundih, tah-bakang mabakang, and those who sow sekarura. After that new Sawa, behind the family and villagers.

Each of these through the intersection of four, Sawa played three times, this prasawya name, all the way sekrura sown. Once on Setra, Sawa played again three times to the left (prasawya), and stopped in front pemasmian (pancak / kiln Sawa). Child pemasmian clean bill with the tip of her hair. After it was placed on pemasmian. Kajang, and Kereb sinom taken and upheld in the back tirtha. Lante, mats and cloth rurub the top is opened.

Then it was sprinkled tirtha Sawa tirtha pengelukatan ie, tirtha archers, and then followed by tirtha pangentas tirtha from saanggah pamrajan and dalem Mrajapati. Rurub awning, kereb sinom reassembled. After it was burned with fire Sawa called: Citta GNI, that can be requested at the preacher, or beg in the temples Mrajapati.

In this cremation should be used as a fragrant wood fire majegau, manengen and others. Lante and pengulungan can be opened and placed in a wood fire under the Sawa. Once eradicated, all burned and dihaturi misstatement “geblangan”. The fire is doused with “Toya panyeheb”, accompanied by a mantram-mantram.

Using tongs. This work is called “inupit” and nyumput areng. Which has been picked galih doused with water, use your left hand, from bottom to top, (Tribute) and then replaced with the right hand up and down (sthiti), followed by another left hand from bottom to top (Pralina). Galih-galih was placed on a “Senden”. After the collected water disirati kumkuman 3x, 3x sekarura also sprinkled with magic spells.
Nguyeg (Grind) galih that had accumulated on senden after charging scent, and then crushed (uyeg). Alas sugar cane penggilasnya is queen, performed well with his left hand. Work carried out on bale Pengastrian.

Smooth parts of galih that, taken with the “sidu” and entered on ivory that has been kelungah Nyuh dikasturi. Kalungah Nyuh Gading ago indication that white clothing (udeng sekah) made with kwangen prarai.

Galih the rough part, cooked up by kwangen pangrekan. Under the thatch that included 54 male seed, if women 27 seeds, disusuni dengan sekar sinom and cymbals fragrant, new clothes and a stack of yellow and white tigasan. Galih who has cooked up this set on Jempana (pengayutan).

Once completed narpana which ended with a worship of the family, the ceremony continued with the sending (nganyut). Before departing pastor memujakan pawisik delivery was accompanied to the Atma. Once completed give pawisik, then Jempana as pengusungan sekah and galih who cooked up lifted, then surround pemasmian 3x (mapurwa daksina). On the way to the river or the sea, every encounter temple sekah dipamitkan dengan worship. Travel should be followed by kakawin or chant. After samapi in the river or the sea, fabric and other jewelry were taken.

The ceremony was held at the entrance to the courtyard of the house. Fissure that leads to Setra, held a ceremony mepepegat, as a symbol of worldly termination with the dead. The ingredients in addition to one soroh offerings, is a rope of yarn that is connected to the leaf tendril dapdap. After completion of offerings dihaturkan, rope yarn until the end of this dilabrak entry.

Thus the ceremony was finished this Ngaben.