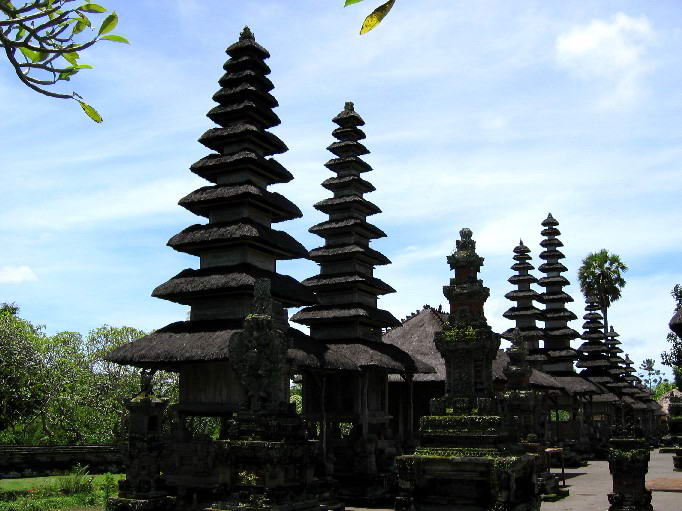 Taman Ayun Temple is located in the village of Mengwi, Badung regency, about 18 km to the west of Denpasar. This temple is very beautiful, in accordance with its name which means beautiful temple in the park. In addition to beautiful, Taman Ayun Temple is also considered to have historical value, so that in 2002 the local government of Bali to propose to UNESCO for the temple is included in the World Heritage List. 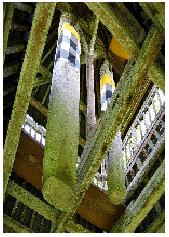 Pura Taman Ayun Temple is a Mother (Paibon) for the kingdom Mengwi. This temple built by King Mengwi, I Gusti Agung Putu, in 1556 Saka (1634 AD). At first, I Gusti Agung Putu build a temple in the northern village of Mengwi to his ancestral shrine. Temple is called the Garden Genter. When Mengwi has developed into a great empire, I Gusti Agung Putu Garden Genter moved eastwards and expand the building. Pura which has been expanded such as Pura Taman Ayun was inaugurated on Tuesday Kliwon-Medangsia fourth month, 1556 Saka. Until now, every Tuesday Kliwon pananggalan wuku Medangsia by Saka, the temple is held piodalan (ceremony) to celebrate the anniversary of the founding of the temple.

Pura Taman Ayun has been amended several times improvement. Repairs carried out on a large scale in 1937. In 1949 implemented improvements to the kori agung, gate while, and making a big Wantilan. The third improvement in 1972 and most recently in 1976.

Taman Ayun Temple complex occupies a land area of 100 x 250 m2, is composed of the outer court and three inner court, which more and more into a higher location. The outer court called Jaba, located on the outer side of the pond. From the outer court there is a bridge across the pond, leading to a gate of a gate while.

The gate is the entrance to the inner court surrounded by a stone fence. At the entrance to the bridge and in front of the gate there is a pair of giant statues. To the left of the entrance, not far from the gate, there are similar buildings to guard a small substation. On this first page there are a Wantilan (such pendapa) used for the ceremony and also as a place of chicken penyabungan undertaken in relation to the conduct of ceremonies in the temple.

As the court in the first split by the road to the gate which is the entrance to the court in the second. On the southwest side there is a round bale, which is where beristrirahat while enjoying the beauty of the temple. In the next round bale there is a pond filled with lotus and in the center stood an obelisk that emits water to the nine cardinal directions. In the east there is a set of small temples called Pura Luhuring Purnama. 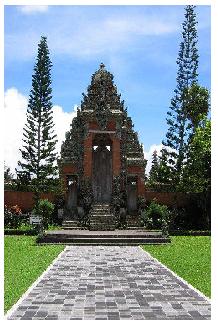 At the end of the street which divides the first courtyard there is an entrance to the court of second. This court of the higher position than the court first. Directly opposite the gate there is a barrier building, is decorated with reliefs depict nine guards god of the wind direction. In the east there is a small temple called Pura Dalem Bekak. In the western corner there Kulkul hall whose roof soaring.

The court in the third or the innermost is the highest court is located and is considered the most sacred. The main door is called a coil located in the middle of the door and only opened when the convening of the ceremony. i left and right of the main door there is a gate that used to go in carrying out daily activities at the temple. In this court there are a number of Meru, Temple, Gedong, Padmasana, Padma Rong Barbadensis, and other religious buildings.