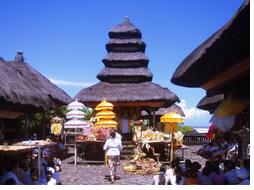 Temple of Tanah Lot is one of tourist objects in Bali, Indonesia. Located in the village of Beraban Kediri sub district and Tabanan Regency is about 13 kilometers west of Tabanan. There are two temples perched atop the rock in the first place, perched on top of the piece of rock and the other at the top of the hill as the temple of Uluwatu. This temple is a sad role of temples Temple Goda is the hinge that form the island of Bali.

Tanah Lot Sea Temple is a temple used to worship the gods of the sea According to legend, this temple was built by a Brahman who roamed the Majapahit kingdom in Java. WHO Dahyang Niratha happened to make a strong faith in the people of Bali for the Doctrine of the Hindus and sad Goda built in century 16.

Although the author of Tanah Lot, BANDESA adherent to the uterus Beraben was jealous because Iyou start from and then her uterus Dahyang Niratha. Beraben Dahyang Niratha without leave of Tanah Lot. He agreed, and before leaving Tanah Lot, by his power replaced a large rock in the middle of the sea (not the center of the sea) and built a temple. It also changed her shawl for a snake to protect the temple. The snake was at the height of that time and scientifically this snake belongs to the class-tale sea serpent has features like a flat fish, the color is black with yellow stripes and their venom was three times more stronger than cobra.

The end of the legend says that eventually BANDESA Beraben also became members Niratha Danghyang. In the background and in the western part of this temple also has a water source and water is a holly According to Hinduism. When the water recedes boxes are invited to the court of the temple to pray. We are only allowed to pray in the temple, if we use a traditional custom. At Tanah Lot, we see the appearance of the moon at night and the sun sets on horizon. Both dishes are pan to see if we take our tourism there. 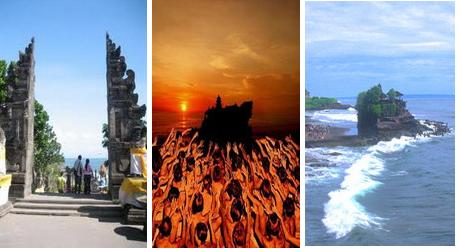 We found cans of country houses such as Graha Wisata Pondok Atiti, Dewi Sinta hotel and hostel 500m simple game but impeccable back along the access road and surrounded by rice fields and also a few meters from the entrance of the temple. While most luxurious five star Le Meridien Nirwana Golf & Spa Resort is located 3 km. Cans are also many restaurants, art shops on the way to the temple.

Directions
It takes about an hour from Denpasar, about 45 minutes from Kuta. Vehicles like Bemo (Denpasar transport in general), Taxi, motorcycles and other vehicles available for hire. Suggest also join guided tours offered by hotels or travel agencies.

The word of Tanah Lot is composed of two words are of the Earth This word interpreted as looking like a reef or an island platform. Much of the word means Lod or sea. So Tanah Lot, the small island floating in the sea place is now called Tanah Lot has been used in a megalithic era as a place considered sacred, as evidenced by the existence of menhirs. Environmental conditions, the structure of the temple of Tanah Lot is built on the corner of uneven reef flat that consisted of a clear and spoil yards.

Function
The function of this temple made boxes to the temple which is located in the main temple. In this place, “there is a main temple to worship the god in the form of the god Varuna or Bhata Segara, the power of the sea Through the worship of this god is the construction of the temple, with five floors of the temple while 3-storey building in the northern part of the area is active in worship Nirartha Dang Hyang.

To check the status of the temple of Tanah Lot boxes became aware of the temple’s history, function and incoming Please also see the existence takes place the ceremony of the temple to pray. Cans, in this case is:

Cans animals only be seen in this area is the Snake Temple, which boxes are usually collected on the coast. A portion of the stomach transversely not skin, there are only small skins, but seawater cases of snake bite, but very rarely are adverse events, because water sea serpent generally very passive.

What to see Tanah Lot

As a preferred tourist destination in Bali, Tanah Lot, a beautiful view, especially at sunset when the sun is slowing down in the earth stomach. Each visitor who is visiting this place to be admired to see the magnificent panorama of Tanah Lot. Besides this temple, other temples that boats can be seen on his visit to Tanah Lot, as Batu Bolong Temple, the Temple and the Temple Batumejan Galuh Enjung.